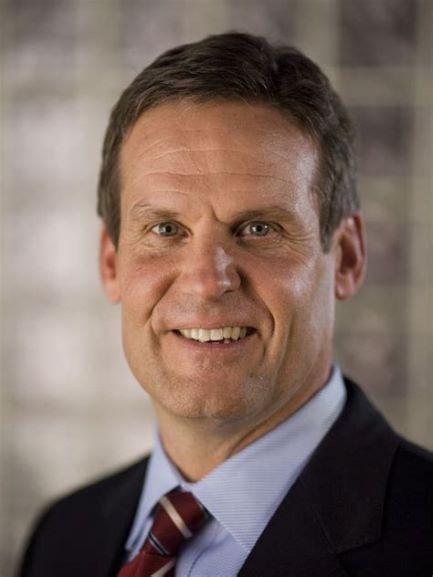 Bill Lee is a seventh-generation Tennessean and the 50th Governor of Tennessee. He was raised in Franklin, where he still resides today with his wife, Maria, on his family’s farm. He’s the proud father of four adult children (Jessica, twin sons Jacob and Caleb, and Sarah Kate) and eight grandchildren.

After attending Williamson County Schools, Governor Lee attended Auburn University, where he studied Mechanical Engineering. After graduation, he returned home to Franklin to join the family business his grandfather started in 1944, a comprehensive mechanical construction service company. He became president of Lee Company in 1992.

Now, Governor Lee is focused on several priorities, including good jobs, great schools, and safe neighborhoods so we can keep Tennessee moving in the right direction.

During his first year in office, Governor Lee passed a series of legislative initiatives to strengthen career and technical training, expand school choice, pursue criminal justice reform, improve public safety, and sharpen the effectiveness of government. His administration is also focused on the accelerated transformation of rural Tennessee.

Under his leadership, Tennessee was named the number one best fiscally managed state in the country, the best business climate in the U.S., number one in the nation for advanced industry job growth and the best state for small business growth. In the past year, the state has garnered 108 project commitments to create 16,500 jobs and $3.6 billion in capital investments, with Mitsubishi, FedEx-Logistics, JNJ, Pilot.com, Hyosung, Amazon, Smile Direct, Icee, and dozens of other companies choosing to invest in Tennessee’s business-friendly environment.

The governor and first lady are people of strong faith. They are active in Grace Chapel Church and in numerous faith-based ministries, which have taken them all over the world to serve people in need, including to Africa, Haiti, Central America, and the Middle East.